He was known as “Jet Stream” in St. Louis, but at Henderson State University they called Roy Green the “Green Machine.”

“Every now and then we’ll be talkin’ about the ol’ days and someone’ll bring up the Monticello game and how incredible Roy was,” Green’s college coach Ralph Carpenter said in a St. Louis Post Dispatch story back in 1981.

“There was nothin’ he couldn’t do. Nothin’,” Carpenter said.

Green was a NAIA All-American cornerback at Henderson State. He intercepted 9 passes his senior season and averaged over 13 yards on punt returns and almost 22 yards on kick returns.

Green was a speed burner, running the 40 yard dash in 4.3 seconds. The Cardinals drafted the Magnolia, Arkansas native in the fourth round in 1979 as a defensive back. He played in all 16 games his rookie season and was named the top return specialist by The Sporting News and Pro Football Weekly.

END_OF_DOCUMENT_TOKEN_TO_BE_REPLACED

Desperate for a front-seven playmaker, the St. Louis Cardinals selected big Dave Butz with the fifth overall pick in the 1973 NFL Draft. The 6 foot 7, 290 pound Chicago area native was an All-American defensive tackle and Lombardi Finalist at Purdue University and would ultimately end up in the College Football Hall of Fame (2014).

Big Red personnel director Abe Stuber told the St. Louis Post Dispatch in 1973 that Butz “was our highest rated defensive player. He has the greatest potential of any defensive lineman in the country.”

END_OF_DOCUMENT_TOKEN_TO_BE_REPLACED

Former Big Red head coach Jim Hanifan and a few stars from yesteryear spoke at today’s National Football Foundation Luncheon at Lombardo’s Restaurant in St. Louis. Hanifan along with former players Johnny Roland, Tim Van Galder, Irv Goode, Eric Williams, and Bob DeMarco talked about their careers in St. Louis and the differences in today’s game and the one they played in the 1960s and 1970s.

As everyone may have guessed, Coach Hanifan was the star of the luncheon telling the packed house how he fell in love with the St. Louis community and the fans after arriving in 1973. “When I first arrived here with Coach Coryell, it took a little while to get used to the area and the people. At the conclusion of that first season, we went 4-9-1. Even with a poor record, there was something special taking place at that time. When I looked into the locker room, I could see the players getting involved in the game and getting involved in the community. And, I myself, had that same experience. Being around the people in the community and truly enjoying being in St. Louis. I used to say, ‘What in the hell do I see here that makes me feel this way?’ You know… there are no mountains, no oceans here… forget about that. So, it has to be the people. The people are what makes St. Louis so great. And that’s why I continue to live here after I retired.”

Former Big Red Pro Bowl center Bob DeMarco recounted playing at old Busch Stadium (Sportsman’s Park) and how fans in the temporary bleachers would offer the players some bourbon on cold Sundays in the mid-60s.

END_OF_DOCUMENT_TOKEN_TO_BE_REPLACED 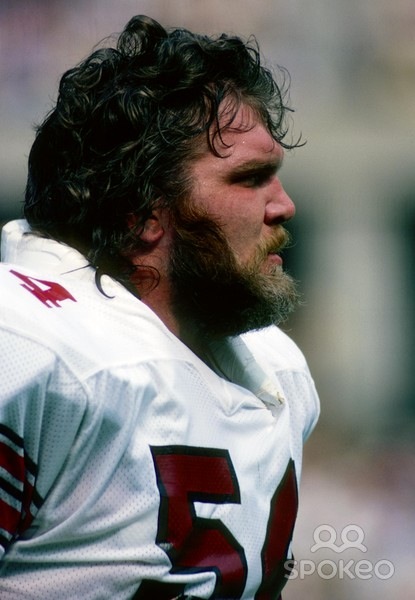 Tom Banks is arguably the greatest center in Big Red history. He was a team leader and outspoken critic of management which made him a fan favorite during his playing days in St. Louis. Banks tells it like it is (and still does) and the fans loved him for it. The All-Pro center was drafted in the eighth round out of Auburn in 1970 and played 11 seasons for the Cardinals (1970-1980). After missing his rookie season due to a broken ankle, Banks became one of the top NFL centers in the mid-70s anchoring an offensive line that only gave up 8 sacks in 1975. He earned Pro Bowl honors from 1975-1978. I recently spoke with Tom about his time at Auburn, his days in St. Louis, and finishing his career with the Birmingham Stallions of the USFL.

Where Are They Now: Tom Banks (Part 2)

Where Are They Now: Tom Banks (Conclusion)

Q: Tom, tell us a little about your father, Tom Banks Sr.? I understand that he was a pretty good ball player himself.

Banks: My dad came out of WWII and went to Jones Junior College in Mississippi. It was impossible to get a scholarship to a major school because of all the veterans coming back from war. He was an undersized offensive lineman at 185 pounds, but he became a Junior College All-American. He took a year off to work in the steel mill when I was born and said it was the best decision he ever made because it made him realize to value education.  He went to Auburn in 1949 and earned a scholarship. He played in the first Senior Bowl in Mobile, AL in 1951 and I was in the stands sitting on my mom’s lap. I was only 2 and a half years old. Later we became the first father-son to play in the Senior Bowl (Banks played in the 1970 game).