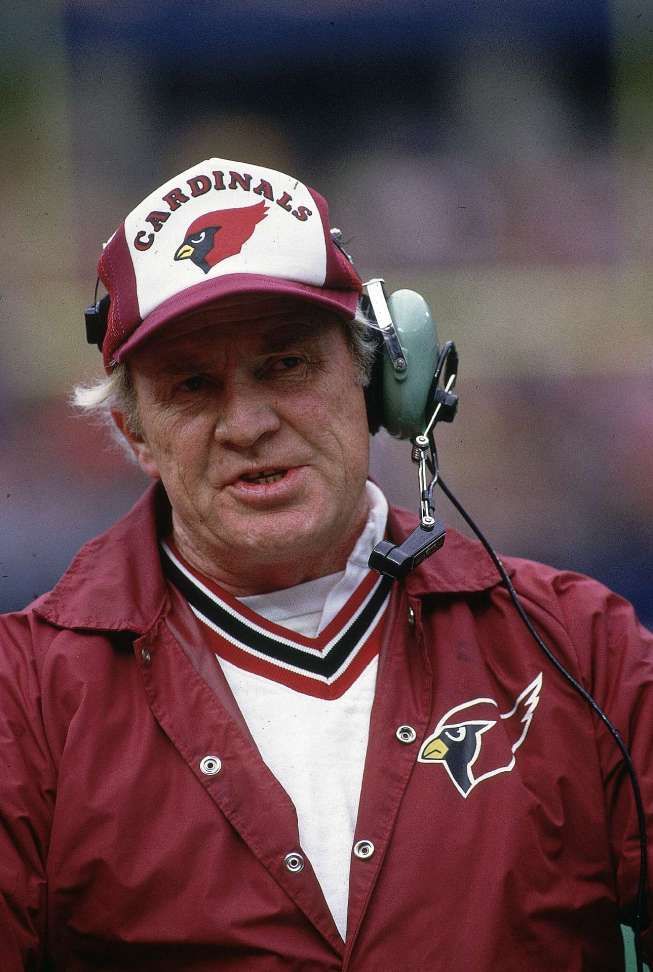 Former Big Red head coach Jim Hanifan and a few stars from yesteryear spoke at today’s National Football Foundation Luncheon at Lombardo’s Restaurant in St. Louis. Hanifan along with former players Johnny Roland, Tim Van Galder, Irv Goode, Eric Williams, and Bob DeMarco talked about their careers in St. Louis and the differences in today’s game and the one they played in the 1960s and 1970s.

As everyone may have guessed, Coach Hanifan was the star of the luncheon telling the packed house how he fell in love with the St. Louis community and the fans after arriving in 1973. “When I first arrived here with Coach Coryell, it took a little while to get used to the area and the people. At the conclusion of that first season, we went 4-9-1. Even with a poor record, there was something special taking place at that time. When I looked into the locker room, I could see the players getting involved in the game and getting involved in the community. And, I myself, had that same experience. Being around the people in the community and truly enjoying being in St. Louis. I used to say, ‘What in the hell do I see here that makes me feel this way?’ You know… there are no mountains, no oceans here… forget about that. So, it has to be the people. The people are what makes St. Louis so great. And that’s why I continue to live here after I retired.”

Former Big Red Pro Bowl center Bob DeMarco recounted playing at old Busch Stadium (Sportsman’s Park) and how fans in the temporary bleachers would offer the players some bourbon on cold Sundays in the mid-60s.

Kansas City native Eric Williams played linebacker in front of 100,000 fans at USC and explained how it was a little different playing at Busch. “What did Busch Stadium hold, 50,000 people?” Williams talked about how passionate the fan base was even though the team didn’t play very well in the late 70s/early 80s. He could have done without the AstroTurf however, as he recounted the numerous rug-burns and injuries he and his teammates endured during their careers.

Johnny Roland was drafted by the Big Red in 1965 and recalled how the Cardinals were always good in the even years while he played here. “We were good in ’66, ’68, and of course in 1970 when we beat the Dallas Cowboys on Monday Night Football. I had a pretty good game in that one. (Laughter)”

Former Cardinal QB Tim Van Galder, who helped beat Johnny Unitas and the Colts in the season opener, told a story about how he and his wife stayed with Joe Namath in 1973 after he signed with the Jets.

KMOV Sports Director Maurice Drummond asked the players the difference between today’s game and the game in the 60s and 70s.

Eric Williams claimed that violence was acceptable when he played in the 1970s and ’80s and referred to fellow linebacker Tim Kearney’s clothesline tackle of Eagle kick returner Dave Hampton in 1976. Hampton was knocked out and spent three days in the hospital, yet Kearney wasn’t even penalized. Williams told a story about he was kicked out of a game his rookie season and received a letter from Commissioner Pete Rozelle which stated, “Violence was not tolerated in the NFL.” He said that everyone thought it was a joke.

DeMarco professed the current game is entirely different. “Back in our day, we (offensive linemen) had to keep our hands inside the body while defensive linemen like (former Lions and Rams DT) Roger Brown were allowed to slap and club us in the head.” DeMarco also talked about former Big Red safety Jimmy Hill whose tackle was basically a forearm. “If he did that today they would arrest him.” DeMarco told a story about Hill hitting former Hall of Famer Bobby Mitchell with a forearm to the back of the head which resulted in a few days in the hospital. Mitchell later told DeMarco that “for one week, I didn’t know where the hell I was.” DeMarco said “When we played, we would have gone out into an empty parking lot and play to see who was going to kick the hell out of one another. That’s the difference. We used to cash our checks at Walgreens. These guys today have a Brinks truck coming to their front door.”

Irv Goode played guard for the Big Red from 1962-1971. He remembered when Roger Brown slugged him so hard that it “took my face mask and brought it flat against my face. I had to come out of the game and get a new face mask. I went back out on the field and said ‘Roger, what the hell is going on? You’re not supposed to be slugging people!’ He said, ‘Quit bitching that was my left hand! (Laughter)’ “(Dick) Butkus was fun to play against because you had better have your helmet on tight and your chinstrap buckled because he was going to hit you. It was always an experience to play against him.”

Van Galder said, “I was scared to death! (laughter)” I had a decent college career, but there aren’t that many people around who in successive weeks lined up about six feet away from Ray Nitschke and the next week Dick Butkus. So, I know what it’s like to get my ass kicked! (laughter)

Roland added, “The game has changed. Obviously it’s a passing game now. I think of it now almost like flag football. You can’t tackle, or you have to have a certain form of tackle.” Roland went on to talk about Tim Kearney’s clothesline of Dave Hampton and how “tough guys” like Kearney and Eric Williams probably couldn’t play in today’s game. “I don’t watch it (NFL) much anymore, because I just don’t find it entertaining.”

In reference to the Kearney hit on Dave Hampton, Hanifan said, “The guy who was supposed to be blocking Tim avoided him. Kearney beat the second guy and clothes-lined him (Hampton), hit him right across the neck. The guy goes down and he’s out. He’s totally out. And then there’s a couple of our guys yelling and screaming at the kid “How do you like that? How do you like that? (Audience Laughing). Well let me tell you, the kid (Hampton) did not know where he was. I remember getting so upset with my players, I said ‘Would you shut the hell up! Shut up! Don’t you see the kid is really hurt for Christ’s sake?’” Hanifan mentioned that he went to visit Hampton in the hospital after the game, saying that it was the only visiting player he ever visited in the hospital. “The game was violent, but it was a lot of fun too. I enjoyed it.”

The luncheon closed with 85 year old Hanifan telling a story about how he crashed Coach Coryell’s new car late one evening while returning from the “East Side.” He claims that he still has no recollection of how it happened. “That’s my story and I’m sticking with it.” The crowd broke out into laughter. Everyone loves the Coach!

The National Football Foundation’s mission is to promote and develop the power of amateur football in developing the qualities of leadership, sportsmanship, competitive zeal and the drive for academic excellence in America’s young people.