An excellent piece by Mark Tomasik over at RetroSimba on the late Bill Koman who passed away on November 1st. Koman played in 120 straight games for the Cardinals back in the 1960s and was a two-time Pro Bowler.

Bill Koman was a talented, durable outside linebacker and one of the respected leaders of the Big Red defense of the St. Louis football Cardinals in the 1960s. He also was outspoken and controversial. 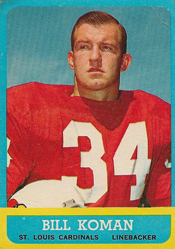 Koman is remembered as a devoted family man, business owner and philanthropist.

William John Koman Sr. was born in 1934 in Ambridge, Pa., located on the Ohio River 16 miles northwest of Pittsburgh. The town was formed by the American Bridge Company and attracted thousands of immigrants to work in the steel mills.

Koman grew up in nearby Aliquippa, Pa., and when he was…