Great story on former Big Red receiver Sonny Randle’s big day in 1962. No one scored more touchdowns in the decade of the 1960s than Sonny Randle. Great receiver!

Among the most proficient teammate combinations in professional sports in St. Louis in the 1960s were Tim McCarver catching Bob Gibson with the baseball Cardinals, Lenny Wilkens passing to Bob Pettit with the NBA Hawks and Charley Johnson throwing to Sonny Randle with the NFL Cardinals. 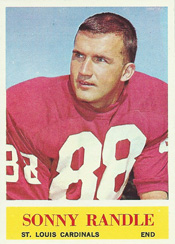 Randle played for the St. Louis Cardinals from 1960-66 after entering the league with the 1959 Chicago Cardinals.

On Nov. 4, 1962, Randle had what the St Louis Post-Dispatch described as “one of the most exceptional pass-catching days” in NFL lore.

Randle had 16 catches for 256 yards and a touchdown for the Cardinals against the New York Giants at Yankee Stadium.

The only NFL player at that time to have more catches in a game was Tom Fears of the Los Angeles Rams with 18 against the Green Bay Packers in 1950.

(Today, the NFL record is held by Brandon Marshall, who…