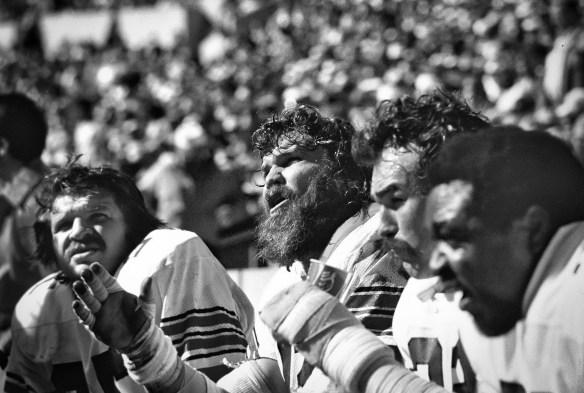 The conclusion of my interview with former Big Red All-Pro center Tom Banks. Tom talks about his final years in St. Louis, his adventure into the USFL, today’s game, and his health, and retirement.

Where Are They Now? Tom Banks (Part 1)

Where Are They Now: Tom Banks (Part 2)

Q: Bud Wilkinson was hired after Don Coryell left in 1977. It was a rough couple of years for the Big Red in 1978/1979. What are your memories of Coach Wilkinson?

Banks: I don’t know if you saw this, but I was quoted in the paper saying, “insanity prevails.” (laughing) I thought it was a good laugh. But I really liked Bud. He was in a bad situation and he knew it right away. He did everything he could to change it, but there was just nothing he could do. Bud went in there and really tried to make things better. But, in the Cardinal organization, back in those days, you had to change their (management’s) attitude toward the players. And Bud learned pretty quickly that that wasn’t going to happen. So, I really think that he got so frustrated, he kept going in there trying to work with management and saw no results. Bud was really a good guy, and I know it was very frustrating for him, but it got to the point where he said the wrong thing to somebody and they told him to pack his bags and he was gone. But, he was trying to do the right thing.

Q: J.V. Cain was a future star tight end for the Big Red. He missed the ’78 season with an injury and then tragically passed away on the field in training camp in 1979. Tell me a bit about J.V. and your memories of that practice.

Banks: Actually, I was holding out here in Birmingham when J.V. passed away. I came up for the funeral, of course. J.V. was just a wonderful man and a great player, but I feel to this day, he was a better person than a player. Just feel so strongly about that. For that to happen to him… we all realized it could happen to any of us. That’s a sobering feeling. He had learned a lot from Jackie (Smith) and having them both there for a few years was terrific. But on his 29th birthday? I mean what a shock for all of us. I’ll never forget that Dan (Dierdorf) called me and told me and I just sat there and cried. He was one of the good guys.

Q: Another tragedy occurred in 1980. Kicker Steve Little was in a car accident that left him paralyzed. He had been released earlier in the day. What are your memories of Steve?

Q: You’ve mentioned Jim Hanifan a few times. He was your offensive line coach during the Coryell days. He was named head coach in 1980 and you were released mid-season. It was very controversial at the time. What are your thoughts on Jim and how you were released?

Banks: You know, Jim was just doing his job, I was wrong in many ways, and I don’t want to talk about it very much. But, I take my share of the blame for that. You know, I haven’t ever lied to anybody about what happened, its just that… I screwed up. And that’s just the way it was. But, I’ve got a good relationship with Jim. I saw him at the St. Louis Sports Hall of Fame induction a few years ago when our offensive line was honored. I don’t have anything against Jim at all.

Q: I’ve talked with Mel Gray about his disdain for the Dallas Cowboys. Do you have any good Cowboy stories?

Banks: (Laughing) Lee Roy Jordan got mad at me once because I blocked him. He started screaming “he’s holding me, he’s holding me,” and I looked at him and got in his face and told him, “let me tell you something Leroy, the first time I have to hold you I’m going to quit this game.” (laughing) And he never said another word, He didn’t talk to me for 20 years, but we are very cordial today. In our advancing years we put these things behind us (laughing).

Q: How about former Eagle linebacker Bill Bergey? I’ve always heard you guys had issues with him.

Banks: Bergey tore my knee up and I know it wasn’t intentional, but he is the one who hit me in the season opener in 1974. I was trying to get up after a block and he dove over the pile and his shoulder drove into my knee and just ripped it out. So, we told him over the years that we were going to get him! (laughing) We just went after him because he was the kind of guy in Philadelphia, if you could control him you could control the whole defense. But we acted like it was personal, but it really wasn’t. (laughing)

Q: You were out of football a couple of years, but in 1983 you signed with your hometown Birmingham Stallions of the USFL. Tell us about your experience in the USFL?

Banks:  As you said, I’m from Birmingham and getting a chance to play in my hometown and finish my career on a better note than when I was in St. Louis was awesome. Playing in front of my family and 12-year-old son, who missed out on a lot of the stuff that kids get to do like coming into the locker room and getting to know the guys. He was able to experience that in Birmingham and he just had a blast. My whole family was able to come to all the home games and it was a good time to just kind of reestablish my career. I played two years with some really good players. Rollie Dotsch was our head coach and he gave me the opportunity to coach the offensive line in ’85, the last year of the league. So, it gave me enough experience in coaching to know that I didn’t want to do that. (laughing). Those guys work way too hard! But, it was a good experience and I really appreciated the opportunity. Management treated us with respect. The money wasn’t what it would have been if I had stayed in St. Louis, but that’s ok. I was going to do anything it took to play and finish my career the way I wanted to.

A clean-shaven Banks finished his playing career in the USFL

Q: The old Busch Stadium AstroTurf. What was it like to play on?

Banks: (laughing) The AstroTurf caused all kinds of problems. We didn’t know about shoes, we didn’t know how to protect ourselves from burns. We didn’t know how to take care of the infections we got from the dirty AstroTurf. We learned after a while but it was a drawn out process. But, we would have played on top of concrete if we had to. After 1970, when all the turf fields went in it all became about joint replacements and I’m sure the AstroTurf and the incredibly hard surface, very unforgiving, was the cause of most of those joint replacements.

Q: How many joint replacements have you had and how is your health overall?

Banks:  (laughing) None of us expected to have good health and most of us didn’t expect to live this long, and that’s just the reality. I’ve had my right hip replaced multiple times, my left knee has been replaced and haven’t had any trouble with it. My right leg is an inch shorter than my left, you know when they do all these surgeries they have to keep cutting things out and you lose a lot of tissue and bone. But I can drive, and my wife and I just moved to Birmingham and have grand children here. It’s a good life.

Banks: Not that I know of anyway (laughing). I keep telling my wife “you pay attention to what I’m doing and if I start screwing up let me know.” (laughing) The union was started because there was nobody caring about the players except the other players. And what we had to do was look out for each other. When Bob Young died at 52, we all expected to never make it out of our 50s, and that was just the way it was. I just turned 70, Dan’s 69 and Conrad is 68 and we all feel fortunate… we all want to live as long as we can. You know the pension has gotten pretty good! (laughing)

Q: What are your thoughts on today’s NFL?

Banks: You now it was a game to us, a game, it wasn’t a business. And that’s the way we approached it. And I think the today’s game has lost some of that appeal and it’s become such a business. Conrad and I visited Dan (Dierdorf) in the hospital after he broke his jaw in 1977 and he told us he would be back (he only missed two games). You know you just didn’t let your guys down and that’s the way we felt about it.

Q: The Rams left St. Louis a few years ago and, once again, we are left without Pro Football. How do you remember your time playing in St. Louis?

Banks: Man, I really hated to hear that because it was just such a great city to play in front of. And the fans, I mean, they loved us. But, you know, that was before free agency. They got to know us. I was there for 11 years. Dan was there for 10 years. You build a relationship with the fans. You just don’t have that anymore. Free agency is not good for the game, but it’s good for the players.

Banks: (laughing) I was a bartender for 10 years. My career was playing ball and tending bar. What else could a young boy want (laughing.) I was 36. Had that one year of coaching and like I said, knew I didn’t want to do that, I didn’t want to travel. So, my son was here in Birmingham, I took a job behind the bar and I had a good time! My whole life has been trying to enjoy everything I do. And I had fun doing both of those jobs. So, it seems like it made sense to me.

Q: Thank you Tom for your time. I think the Big Red fans will love this!

Banks: You know, anything I can do, Bob, I’m really enjoying this. I love participating in the Facebook group. I like the idea of the super fans, and you know, I don’t care how long it’s been since we played. To me, when people are interested in this stuff, it’s an obligation to talk about it. And I love doing it anyway! 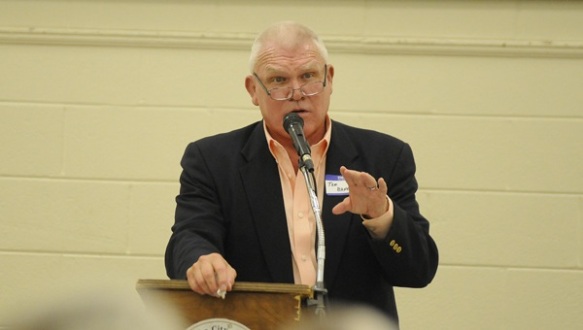 Tom Banks at a speaking engagement in 2016

3 thoughts on “Where Are They Now: Tom Banks (Conclusion)”